You are leaving www.xulanehcp.com, a VIATRIS™ Inc., company website

The website you are about to access is not owned or controlled by Viatris. Links to other websites are provided as a convenience to users and the inclusion of any link does not imply the endorsement of the linked site by Viatris. Viatris accepts no responsibility for the content of any linked sites.

What is the
Pearl Index?

FDA has recommended in draft guidance that companies developing hormonal contraceptives use the Pearl Index (PI) during the first year of use of the product as a primary endpoint.

The PI is the number of pregnancies per 100 woman-years and is associated with a 95% confidence interval. FDA has recommended that this analysis be calculated only using women 35 years of age and younger.1

How is the Pearl Index calculated? 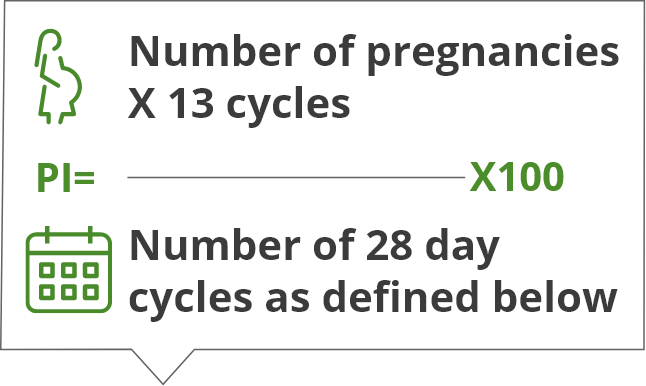 Each cycle lasts 28 days, so there are approximately 13 cycles in one year.

The Pearl Index calculation typically includes all pregnancies for which conception is estimated to have occurred while the woman was using the drug (i.e., on-treatment pregnancies), but only includes cycles where the woman had vaginal intercourse and did not use backup or emergency contracepton.1

What is the Pearl Index of XULANE transdermal patch?

The pregnancy rate in women aged 18 to 35 years was 1.07 (95% CI 0.60, 1.76) per 100 woman-years. To achieve maximum contraceptive effectiveness, XULANE must be used exactly as directed. XULANE must adhere securely to the skin to work properly. See Limitations of Use.

*Differences exist from inclusion criteria from the more recent FDA Draft Guidance on calculations of Pearl Index. The impact on Pearl Index may be minimal. †In 3 large clinical trials lasting 12 months, 3,330 women (ages 18 to 45) completed 2,155 cycles of NGMN/EE (Ortho Evra®) transdermal system use. 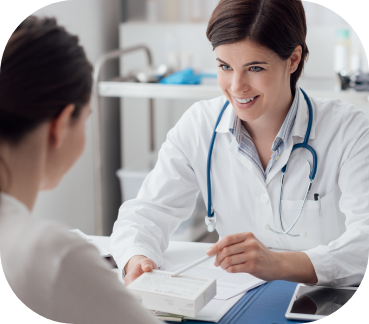 The systemic delivery rate of norelgestromin (NGMN) and Ethinyl Estradiol (EE) transdermal system is approximately 150 mcg of NGMN and 35 mcg of EE per day based on a comparative analysis with intravenous (IV) data. Following a single application of NGMN and ethinyl EE transdermal system, both NGMN and EE reach a plateau by approximately 48 hours. Pooled data from the three clinical studies have demonstrated that steady state is reached within 2 weeks of application.2

Inter-subject variability (%CV) for PK parameters following delivery from NGMN and EE transdermal system was higher relative to the variability determined from the oral contraceptive. The mean PK profiles are different between the two products and caution should be exercised when making a direct comparison of these PK parameters. 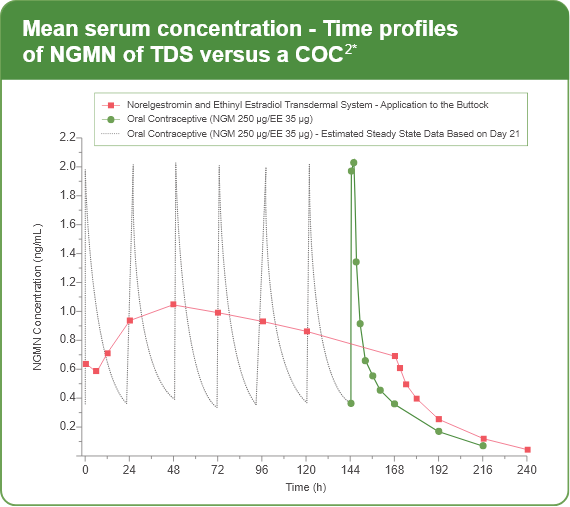 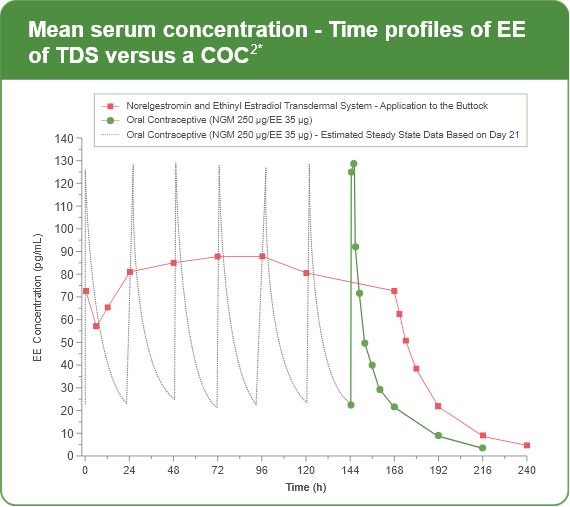 *Following once-daily administration of an oral contraceptive for two cycles or application of NGM for two cycles to the buttock in healthy female volunteers.

WARNING: CIGARETTE SMOKING AND SERIOUS CARDIOVASCULAR EVENTS and CONTRAINDICATED IN WOMEN WITH A BMI ≥ 30 kg/m2

Cigarette smoking increases the risk of serious cardiovascular events from hormonal contraceptive use. This risk increases with age, particularly in women over 35 years of age, and with the number of cigarettes smoked. For this reason, CHCs, including XULANE, are contraindicated in women who are over 35 years of age and smoke [see Contraindications (4) and Warnings and Precautions (5.1)].

Other Warnings and Precautions

Patients should be counseled that XULANE does not protect against HIV infection (AIDS) and other sexually transmitted infections.

USE IN SPECIAL POPULATIONS

INDICATION AND USAGE: XULANE is indicated for the prevention of pregnancy in women with a body mass index (BMI) &lt30 kg/m2 for whom a combined hormonal contraceptive is appropriate. Limitations of Use: XULANE may be less effective in preventing pregnancy in women who weigh 198 lbs. (90 kg) or more. XULANE is contraindicated for use in women with BMI ≥ 30 kg/m2 [see Contraindications (4), Warnings and Precautions (5.1) and Clinical Studies (14)].

This is not all of the information you should read prior to prescribing XULANE. Please see the Full Prescribing Information, including Boxed WARNING.